Dog with a Job – Kota Learns the Importance of Stillness 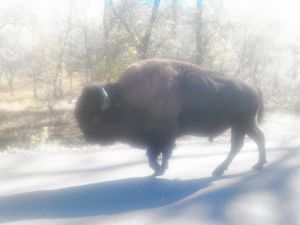 Kota learned the importance of stillness recently when two bison strolled by the car he was sitting in with Carrie. Sometime it is important to be invisible when we do our work!

A few days later, when Carrie and Kota were in the bison pasture mending fences, Kota showed he had learned his lesson well. Kota’s job was to watch for bison and let Carrie know if one got close. Carrie saw the bison first – it was less than 200 feet away. Kota saw the bison and quietly stood his ground between it and Carrie. Carrie snapped this photo, said lets go, and Kota turned to follow her to the truck. Good boy Kota! 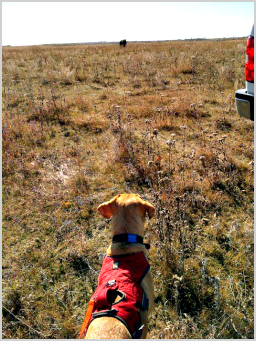