Have you noticed that some people and their pets share a resemblance? 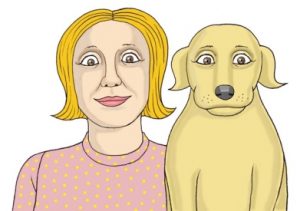 Have you noticed that some people and their pets share a resemblance? Research shows that in about 80% of cases, they do!

In one study, 61 people were asked to look at photos of dog-human pairs and judge which pairs showed a physical resemblance. Some of the photo pairs were of people and their own pets (real pairs) and others were photos of people and dogs who were not their pets (fake pairs). The photos were simple head shots and did not show any interaction between the pair. Approximately 80% of judges identified the images of real-life pairs as those showing a resemblance. In an attempt to identify what enables us to correctly link owners and their dogs, psychologist Sadahiko Nakajima enlisted the help of 520 Japanese undergrads to judge photo pairs in which various features were blocked out. When only the mouths were masked, judges were 73% correct in identifying real pairs. When the eyes were masked, the ability to correctly select real pairs was lost. When all facial features were blocked except for the eyes, 74% of judges still chose the true pairs! The reason the eyes are such a powerful cue for correct selection of pairs is unknown.  To read more about this study go to  http://goo.gl/Bti0j4.