Why is Sperm Quality Declining in Humans and Dogs? 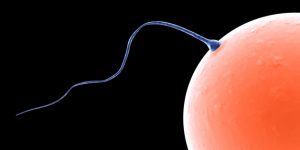 Humans and dogs share a common problem – a trend toward declining sperm quality. In both cases, environmental chemicals have been identified as a likely culprit.

A decline in sperm quality in humans has been discussed for decades and new data in dogs demonstrate similar concerns. Many have suggested that declining sperm quality is due to the endocrine disrupting effects of environmental chemicals. New evidence from research in dogs provides evidence to support this.  Importantly, it has been suggested that the dog may serve as a “sentinel for humans” in that they share the same environment, are exposed to the same toxins, and have the same health problems.

Studies conducted in the 1970s in humans demonstrated that occupational exposure to pesticides can impair male fertility. It is likely that dogs are affected similarly. More recent research conducted in intact adult male dogs demonstrates that the quality of sperm has fallen significantly over a 26-year period. Moreover, the decline in semen quality was associated with an increased risk of cryptorchidism in offspring of stud dogs with poor semen quality.  Sperm from intact dogs and testes from neutered dogs were found to contain chemicals used as flame retardants and in plastics (both endocrine disruptors) at concentrations high enough to alter sperm motility and viability. Importantly, these same chemicals were found in canned, dry, and puppy formula commercial dog foods. These data suggest that our food and its packaging may be a source of these toxins. However, endocrine disruptors also are found in many other everyday products – plastic bottles, carpets, shampoo, medical supplies, pharmaceuticals, cosmetics, pesticides, water, and soil, among others.

To avoid endocrine disruptors, reduce the use of harmful chemicals in the home (there are many easy chemical-free substitutions); be a critical consumer (ask manufacturers what chemicals are in their products); avoid packaged foods, particularly those in plastic and most cans; when remodeling or redecorating be aware of off-gassing from flooring, furniture, cabinets, etc.; eat/feed organic foods when possible; and avoid exposure to toxic pesticides. While you can reduce exposure to toxins, it is impossible to avoid them totally. Therefore, it is important to routinely help the body rid itself of toxins. This is accomplished by eating fresh whole foods, being physically active, breathing clean air, soaking in a detoxifying bath (foot soaks work too), and drinking plenty of fresh, clean water. There are also a variety of holistic strategies to help with detoxification, such as herbal products, infrared saunas, body work (eg, massage, polarity) and use of PEMF devices, among others.

For more details on human and canine fertility trends, see  https://www.ncbi.nlm.nih.gov/pmc/articles/PMC4691969/ and http://www.nature.com/articles/srep31281