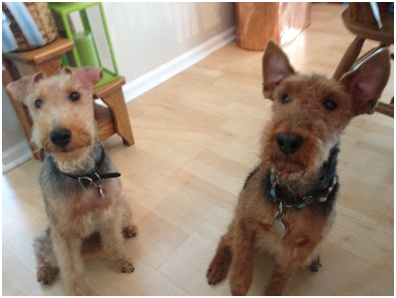 Rusty after his recovery

This case study reports on the successful use of Reiki and herbs to support a 10 ½ year old welsh terrier in his full recovery from an adrenal tumor without the use of conventional methods such as drugs or surgery. The initial diagnosis and ultimate recovery were both documented using a standard medical procedure called ultrasound imaging. Rusty’s story begins in mid 2013 when he became weak and hypertensive and was diagnosed with an adrenal tumor by his conventional veterinarian. His owners, James and Meredith, opted for holistic treatment instead of the recommended surgery. With the support of herbal remedies recommended by a naturopathic doctor and reiki provided by a Reiki Master, Rusty’s tumor dissolved! Rusty has just had his 13th birthday and is healthy, happy and active, without any evidence of an adrenal tumor.

Please read the following accounts by Rusty’s owners and Reiki Master to learn more about this case. As you review this material, please keep in mind that holistic treatments are highly personalized. For that reason, we cannot provide you with a specific combination of herbs for the treatment of adrenal tumors. Instead, we encourage you to seek the help of an holistic practitioner who can develop a program directed to the specific needs of your pet. The practitioners who contributed to this case were:

Rusty is usually very excited to go on his walks, but on the afternoon of June 30, 2013 he was unable to walk down the stairs and refused his dinner. After touching his belly, we noticed that his stomach was distended and he was extremely guarded about his stomach. We knew there was something very wrong. He also gave us “the look”. He was telling us, “This isn’t good, guys!”

We scheduled a visit with a veterinary surgeon, to do a CAT scan and to determine Rusty’s eligibility for surgery. This CAT scan was to determine the true size and impact of the tumor, and to determine if the tumor was operable. The tumor was deemed operable and the surgeon stated that the quality of life following an operation like this is excellent. However, it was also noted that the survival rate is only 85%—death rate being 15% during this type of surgery. Because Rusty is a smaller dog, the survival rate is actually a bit lower. However, there was little data to suggest how much lower.

In the last month or so of treatment Rusty had become more anxious due to the addition of an infant into the home. His parents had welcomed a beautiful baby girl into the world in October, 2013. Rusty was very protective of her, causing him to go into fight or flight mode very often as he sensed any activity outside the house. There was concern that this anxiety would have an adverse effect on his physical well-being. Much of the treatment during this time was focused on calming Rusty’s anxiety. In a short period of time Rusty’s anxiety settled and his health continued to improve. 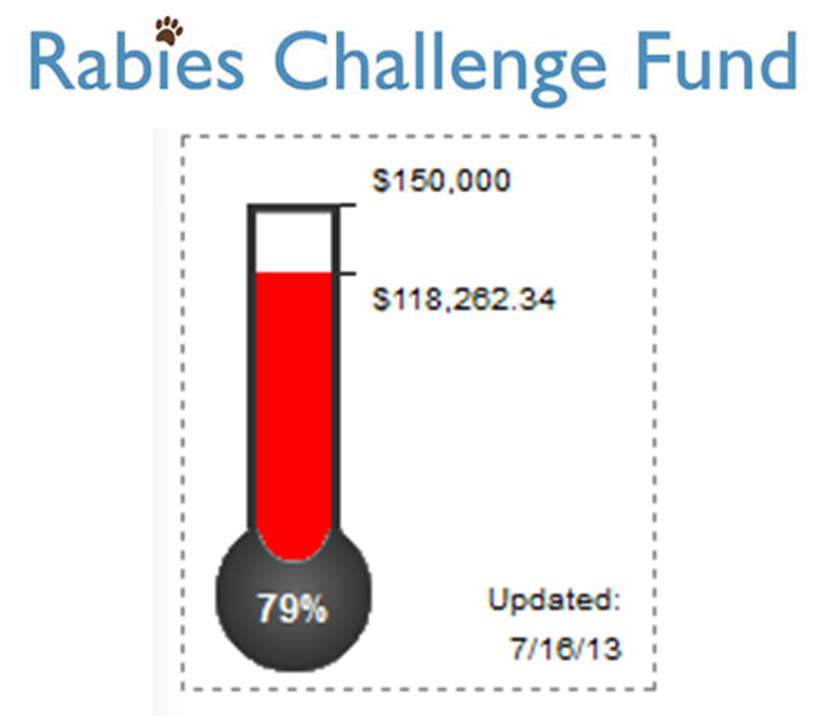 Protection against the rabies virus is an important part of US public health policy. However, the vaccine is not without risks. The rabies vaccine is associated with a high rate of adverse reactions that can lead to substantial illness and even death in some of our pets.  Because the risk of adverse reactions increases with each dose of rabies vaccine administered, the Rabies Challenge Fund is working to scientifically demonstrate that fewer life-time doses of the vaccine will provide at least equivalent protection compared with current immunization schedules.  Fewer rabies doses over a pet’s lifetime will reduce the risk of adverse reactions and reduce costs to pet owners.

The Rabies Challenge Fund is a Charitable Trust whose goal is to extend the legally required interval for rabies boosters to 5 years and then to 7 years based on the results of rabies challenge studies being conducted at the University of Wisconsin. Two well-known and respected individuals are guiding this project – Dr. Jean Dodds of Hemopet and Dr. Ronald Schultz of the University of Wisconsin.

This research is important because of the high potency of the rabies vaccine and its association with a number of serious adverse effects. These include damage to the nervous system, leading to muscular atrophy, inhibition or interruption of the nervous system  control of tissue and organ function, lack of coordination, and weakness; a variety of autoimmune diseases (an autoimmune disease is an abnormal immune response causing the body to attack its own healthy tissue) such as autoimmune hemolytic anemia and autoimmune diseases affecting the thyroid, joints, blood, eyes, skin, kidney, liver, bowel and central nervous system; serious allergic reactions such as anaphylactic shock; aggression; seizures; epilepsy; and tumors called fibrosarcomas at the injection site. Because most of these are delayed reactions occurring months or years after administration of the rabies vaccine and because these reactions can have multiple causes, their association with the rabies vaccine is often missed. 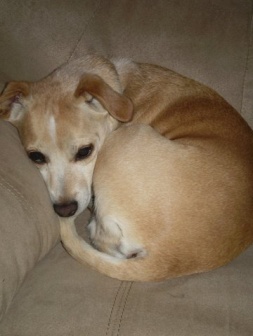 The five most common chronic health problems seen in pets are:

For more information on these conditions and ways they can be managed, visit http://healthypets.mercola.com/sites/healthypets/archive/2012/12/21/top-5-pet-health-problems.aspx?e_cid=20121221_PetsNL_art_1