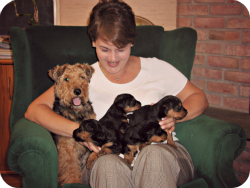 Welsh terrier Ava successfully delivered 3 puppies -one boy and two girls. Each puppy immediately began breathing upon removal from the birth sack. Things didn’t go as smoothly with puppy number 4. Despite using all the usual techniques to stimulate him, puppy number 4 would not breathe. We then used a fingernail to vigorously stimulate the acupuncture point known as GV 26. Stimulation was accomplished with a firm, deep, pecking motion. The puppy, later named Justin, gasped immediately and took his first breath. He continued to breathe normally and grew into a healthy, happy adult.

Governor Vessel 26 (GV 26) is also called Jen Chung, Ren Zhong (meaning Man’s Middle), or Shui Gou. In man, GV 26 is located on the center line one-third the distance between the nose and upper lip. In the dog and cat, it is located at the point where the skin of the nose meets the vertical groove above the upper lip. Stimulation of this point may also be useful in resuscitating adult dogs with cardiorespiratory collapse. (Case study provided by Mary Duafala mary@abbeyrosefoundation.org)