A Potato is a Potato, Right? 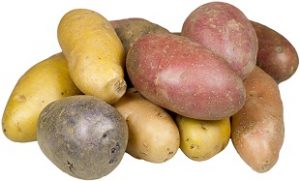 White potato or sweet potato – a potato is a potato, right? In this article, Dr. Jean Dodds explains why the sweet potato might be the better choice for your pet (and you)!

Sweet Potatoes versus White Potatoes: What is the difference for your pet?

There’s a famous old song with the lyrics, “You say potato, I say potahto; let’s call the whole thing off.” The songwriters obviously weren’t intending to compare the nutritional characteristics of white potatoes and sweet potatoes when they penned that line, but it’s not such a stretch. Navigating the white potato versus sweet potato maze can at times be confusing. So, let’s get to the root of this potato mystery and explain it once and for all.

Two Potatoes: two species
You might be surprised to discover that sweet potatoes are not just orange-colored white potatoes. Sweet potatoes and Russet potatoes, the most common white “baking” potato, come from completely different botanical families.

Russet potatoes are part of the Solanaceae family, which belongs to the nightshade group of plants. Many species of the Solanaceae family, including potatoes, naturally produce nitrogen-containing compounds called glycoalkaloids. Potatoes and other edible plants including eggplants, peppers and tomatoes produce glycoalkaloids as a natural defense against predators such as animals, insects and fungi. Glycoalkaloids are natural toxins that act as the plant’s natural pesticide and fungicide. You know those green spots sometimes evident on white potatoes? They indicate the presence of increased levels of glycoalkaloids and should be discarded, as should white potatoes that are already sprouting or bruised.

Some researchers believe that glycoalkaloids can damage the joints by producing inflammation and contributing to loss of calcium from bone, but this has not been proven.

In addition, studies show that glycoalkaloids in doses normally available while eating white potatoes can cause the membranes that line the intestines to become permeable (“leaky”); disrupting the intestinal barrier can initiate or aggravate Irritable Bowel Disease (IBD). This fact flies in the face of the common and successful use of potatoes that are included as a “bland” carbohydrate source, to be fed as a limited ingredient diet for animals with “leaky gut” and IBD. Sweet potatoes are a completely different plant species than white potatoes. Sweet potatoes belong to the Convolvulaceae family and are known by the scientific name of Ipomoea batatas.

Since sweet potatoes are not nightshade plants, they do not produce toxic glycoalkaloids. A switch from white potatoes to sweet potatoes might be warranted if your dog suffers from a neurological, or unresolved gastrointestinal or inflammatory health issue.

Carotenoids, the pigments that give sweet potatoes their lovely orange hue, are powerful antioxidants with a variety of health benefits, including:
•  Pre-cursors to vitamin A, which is essential for a healthy body
•  Boost immune function, increasing the ability to fight infections, especially viral infections
•  Increased immune function that helps protect against cancer
•  Maintains healthy lining of the digestive tract, respiratory tract and skin
•  Improves retinal function, particularly night vision
•  Reduces inflammation

Sweet potatoes and gastrointestinal health
In an earlier post, we discussed the use soluble fiber in the form of pumpkin to control diarrhea in pets.

As we mentioned, there are two types of fiber – soluble and insoluble – and most foods contain a combination of the two.
•  Soluble fiber absorbs water from the digestive tract, forming a gel-like substance that slows down the digestive process. Soluble fiber is found in foods such as oats, peas, beans, apples, citrus fruits, carrots, barley, psyllium, pumpkin, potatoes and sweet potatoes.
•  Insoluble fiber adds bulk to the stool and tends to speed up the passage of food through the digestive tract. Insoluble fiber is found in foods such as whole-wheat flour, wheat bran, nuts, beans and certain vegetables such as cauliflower and green beans.(Vorvick, 2012; University of Maryland, 2011; Mayo Clinic, 2012)

Sweet potatoes, like pumpkin, are a good source of soluble fiber that can help regulate your pet’s digestive tract. However, when choosing between pumpkin and sweet potato, be aware that sweet potato contains more than double the calories than pumpkin, which can then “pack on the pounds”.

Try steaming some sweet potato for a healthy and delicious addition to your pet’s diet. And, remember to always introduce new foods slowly; even healthy foods can provide “too much of a good” thing if introduced too quickly to delicate stomachs!

Chilkov, N 2011, ‘Benefits of Carotenoids: What Colors are on Your Plate?’ Huffington Post, 1 August, http://www.huffingtonpost.com/nalini-chilkov/carotenoids-benefits_b_889586.html.

The World’s Healthiest Foods 2013, What are nightshades and in which foods are they found? http://www.whfoods.com/genpage.php?tname=george&dbid=62.